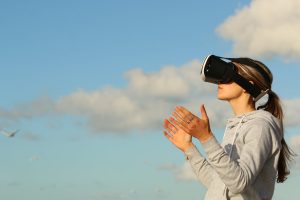 A week in the life of a cancer cell could be the title of a new VR gamified experience from skin cancer prevention expert Dr Elke Hacker.

Put on the goggles and you’re inside a body fighting proliferating melanoma skin cancer cells, in a VR game whose user-centred design aims to engage and educate young people on how cancer begins the methods of treatment in the fight against the deadly spread of melanoma cancer cells.

VR has been shown to be more effective for memory recall and behaviour change than digital desktop delivery and we combined it with gaming elements to provide an entertaining communication channel relevant to a young audience.

The immersive VR is a first-person shooter game in which the user is transported into the lungs of a human body where a dark pigmented melanoma begins to grow. The user’s task is to fight the cancer by ‘shooting’ it with several treatments including chemotherapy, targeted therapy and immunotherapy.

As the game progresses the cancer cells become resistant and the user must escalate through the treatments to defeat the cancer. It is designed to show the difficulty of treating late-stage cancer and promote sun-safety habits and the importance of early detection. A case study tested the VR game with the target audience who found it engaging and safe. The study’s findings were peer reviewed and published in the Journal of Medical Internet Research: Serious Games, entitled “A case study on the development of a virtual reality game to change behaviour and prevent cancer: User-Centred Design Approach”.